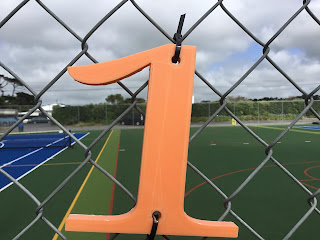 Challenge/Background: On August 6th 2018 a student from the classroom produced a series of numbers to represent the classrooms of our school.    The numbers which are for emergency evacuation assembly have been attached to a outside fence and left directly exposed to the elements.   We have previously updated the conditions of these prints on this blog, and have again revisited them in the heat of summer in New Zealand.

We have now reached the six month mark.   During this time we have had a multitude of weather directly affecting the numbers and they are in an open position on a fence next to a field with no coverage protection what-so-ever.   Given that there is no visible weather to the PLA plastic of the numbering, and very little evidence of the fading of the colouring of the numbers.   This can be illustrated by comparing one of the original prints as mounted on the wall six months ago, compared to a print that has been taken today.   Seen below there is very little evidence of weathering. 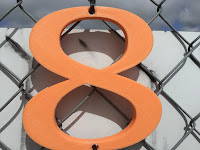 Left:
As shown today (Thursday 17th of January 2019).    There has been a close up of the print to show clearly that there is no evidence of cracking or any obvious discolouring of the orange colour of the original print.

Left:
As originally mounted on the fence in early August 2018.  As compared to print above you can clearly see the colour has been maintained and there is no obvious change in condition.
Posted by M Webb at 10:57 AM