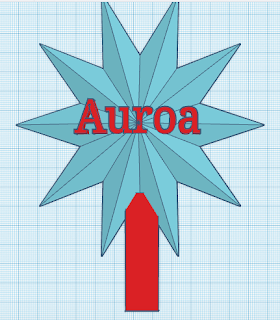 Challenge: 3D Printed Christmas decoration, as mentioned and described in previous posts, a Christmas decoration for a local shop with a theme of the school, thus featuring 'Auroa' instead of the students name.
Background: Students were using the updated 'beta' version of Tinkercad which has an expanded basic shapes and significantly improved lettering options (an option to be able to print a series of letters or sentences - instead of previously having to add each letter individually).
Task: Using the 'beta' version of Tinkercad to design a print, allowing the students to use the new features, with emphasis on the specific challenge.
Level of Difficulty: Easy - while this design potentially looks complex all of the features are in fact part of the new version of Tinkercad and feature from the regular menu.  The student designed this in her first attempt in under three minutes, although she had previous experience with using the original Tinker.  Student is Year 5 - so turning ten.
Issues: The student had a thickness of 5mm with the print to ensure that it ran correctly, which is did, this was probably too thin for the base of the star, which cracked when being removed from the plate.
Size: 20cm in height, 15cm across and a depth of 5mm [which made the base fragile.]
Timeframe: Nine hours.
Process: This was significantly contributed by the new 'beta' version of Tinkercad (which is free).  The design was completed by basic settings and then saved.   This was then loaded into the new version of Cura and then transferred to the printing - Ultimaker 2.
Reflection: If someone was to state that 3D Printing was too technical this is an example of something practical that could be completed in a insignificant timeframe that would produce an eye catching positive example of 3D Printing (in addition there was the intention to Glow-In-the-Dark filament the print for further effect).

Challenge: To create an original 'Christmas' design for a Christmas Tree, suitable to be hung.
Background: As previously stated these designs all evolved from the same project.  While we had three printers running, filament delays meant these were backed up and the project stretched into December, this allowed students to utilise the new beta version of Tinkercad (which is a significant improvement) and also refine their designs based around earlier prints.
Task: To create an original (from scratch) design which predominantly featured the use of the new objects and lettering from the beta version of Tinkercad.'  The original idea was for a personalised one, then the School was requested to make a series of prints for a Christmas Tree at a local shop - however students involved in the process did not want their prints in general to go to the shop so they used them for their own trees despite featuring the name of the school!

Level of Difficulty: Easy - some of the students involved modified prints and designs that were used as part of the 'Cookie Cutter' projects with subtle changes.  The students creating from scratch were able to create the key required parts from the basic set up.
Issues: The student decided to individually create the letters using the old version of Tinkercad, therefore they were slightly different sizes and the second 'a' was noticeably smaller than the others, however student was more than happy with this.   The box was introduced as a base for the printing of the letters.
Size: 20cm from tip to tip and 20cm across, depth of 5mm.
Timeframe: Eight hours. (Ultimaker 2+ with 4mm nozzle)
Process: The original design was created using a star shape that was located as a stencil GIF as part of the 'Cookie Cutter' project.   The student wanted to use a base design for a star for the top of the tree and thus took the original star design and simply added the 'Auroa' block and lettering to meet the criteria desired for the Christmas decoration.  The new version of Tinkercad was not used as the student preferred using the older version which he was familiar with (see note about the lettering).   Cura was used as with most prints on this site and then the print was downloaded.
Reflection: the student himself was extremely happy with the print but this was essentially just a small modification of a previous project, and while he was happy with the results he could have had more variation with it.  As a project to capture attention for a display piece its some seasonal value and the potential is there for considerable personalisation of the ornament.
Posted by M Webb at 10:30 PM No comments: