Challenge:   To produce a working 3D Printed Bookmark for student to use with a regular book.
Background: Inspired by a generic challenge that was set/sent out with examples of 3D Printed Bookmarks.   These examples had been produced by adults but they were used as examples that were given to the students in the classroom and the student were asked to produce their own designs.  A focus need to be made on producing a workable bookmark that could be used to hold a position in a book.    This example originally had a single block that was thin and intended to hold the bookmark in place.    When this was trialed it was discovered that it did not pin or hold the page in place and slid out.   The student then designed a pin/clip to hold the bookmark in place.   Key to solving this issue was the width of the clip relating to how many pages that it was intending to hold in place.    The student was experiementing with 3D Design and has a strong design ethic and ideas, although this student, who is nine was producing his first significant individual 3D Print.  In the initial design there were issues with the clip although the student had the basic premise and idea correct.  He also decided not to over complicate the design of the truck, keeping a basic shape without additional decoration.
Level of Difficulty: Medium.   Once the shape was determined and the concept had been discussed the student created a sketch of a plan.   The 3D Print required significant alterations for the print to be considered successful, however by printing a first version it alllowed the student to clearly see the modifications that needed to be made.
Timeframe: Two hours forty minutes.   This was the ideal print to complete a 'draft' print for - given its size and dimensions.
Size: 100mm long, 30mm across and 20mm high.   Suitable for the realistic size of producing a bookmark for a regular novel book.   The portion of the design that was inserted into the book itself was a clip/double bar that was 40mm long.
What we would do differently: Very little - this project already had the reworking completed by the student between the first and second prints.   The final adjustments made to the print allowed a short term print to complete the task that it was intended for and complete the challenge.
Posted by M Webb at 4:34 PM No comments:

Challenge: Student wanted to create a personalized storage holder for storing stationary items to assist her in the classroom.
Background:
Student was looking to venture towards creating something that was significant and would require extensive design and finishing to create a finished piece that the student would be extremely proud of.    The student has proven time and time again in the classroom to be a student with artistic design and creation.   She was adamant right from the onset of this project about the colours and the design.     She oversaw the entire project which had little or not input from the teacher (other than suggestions about the size).   The design came from a prepared source - the hat was a standard Tinkercad design as were the rabbit ears, the student was responsible for the name.   This is the design before final finishing.   The lettering in question is held in place by blue tack and requires finishing including the use of sandpaper.   The ears are also in place in the photograph as a trial as the student wanted to experiment with the placement of them relative to the design and placement of the name etc and consider whether or not to add additional features to the design.
Level of Difficulty: Medium - despite the scale of the project and the finishing the 3D Printing element of the project was straightforward based around the three key elements - the name, which is very straightforward, the hat - which came from the main Tinkercad interface, as did the ears.   The difficulty with this project has come with the finishing, given its scale it required significant rafting, and rafting removal, which left some damage to the hat (which was not particularly visible as it was produced, deliberately in black).  The student is intending to have it spray painted to touch it up and was to use sandpaper to improve the finishing on the name and the ears.
Time frame: This print is not for the faint hearted and was never intended to be anything less.  The ears and the name came in at a hour and the hat as a single piece took twenty two hours to complete as a single piece.    This was at a 20% infill with the usual 8mm nozzle.
Size:   The piece was 140mm high and 100mm across.  It was particularly thick with a significant depth to its sides.   This came as part of the design from Tinkercad and the student choose not to alter this to affect the overall design.
What we would do differently:   The biggest issue of a print this size would be the amount of rafting that it produces which is excess or waste plastic.  In this case the lip of the top hat, which creates the entire affect of the design.  There was a significant amount of plastic that ran the length of the design that needed to removed - it caused damaged to the hat.  Ultimately it could have been designed in component pieces that would have allowed it to minimize both but the student wanted to simplify the process.
Posted by M Webb at 4:10 PM No comments:

Challenge: To create a farm accessory to work as a hay feeder.  The print needed to work in conjunction with a number of other items such as hay bales and model to scales cows.
Background: Following the success of the students who designed the four and eight calf feeder designs for the farm toy business the students decided that they wanted to target the next item on the list which was a hay feeder.  This involved creating a base with bars and a cage.   The students who designed this originally decided to create it as a single piece and as a result there was significant amount of rafting.  As a consequence the removal of the rafting was relatively difficult - there was a bar that was popped out when it was removed. The students were then faced with a challenge - how to produce the cage without having to produce so much rafting.
The solution which they came up with was producing the cage in stages, first as the base and the top, with the second stage being the base of the platform having holes in it which the poles could then be inserted into.   This was a slightly complicated process as it involved including the depth of the poles into the base etc.    However the students were able to half the printing time for the project and remove the need for rafting.   The students are again creating this prototype as a potential commercial project for a company that produces farm themed toys and sells commercially. 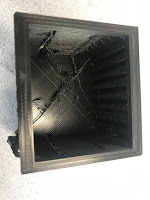 Level of Difficulty: High - this is producing a product that is potentially going to be made commercially and requires the base, base and top level to work in unison.   It has required considerable reworking to get the measurements and design to a point that it would be considered to be completed.   This has stretched some of the top design students in the classroom to their limits to complete it with the minimum amount of printing required.
Time frame:   The original design that was a one single piece design had a significant piece of rafting and had a ten hour print time (see photo left) the revised version with the students creating individual bars and a separate base and lid was five hours total for all of the parts of the project.   This second version has virtually no rafting and therefore would be the direction to move in the future.  The normal default settings apply as always, which is an 8mm nozzle and 20% infill. 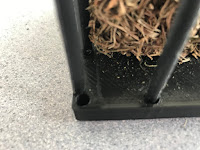 Size: The design measure 90mm across and was 80mm deep.  The design was 60mm high and the top frame had a 10mm box design as its framing.  Relative to the design of the hay and other animals this fits perfectly with the expectations for the design.
What we would do differently: The students underwent an extensive revision process to get this design correct including considerable reworking, measuring and development.   Little additional design is required with the exception of a stand for the cage, as it has one in real life.   The students themselves were the ones that drove the improvement based around the printing differences between version top left (ten hours of printing and considerable additional rafting to maintain its shape and form).    The second reworking of the design and print involved the bar rods being printed separately and featured and insert in the base, you can see this clearly in the photograph of the print with the bar removed shown in the top right hand photo. 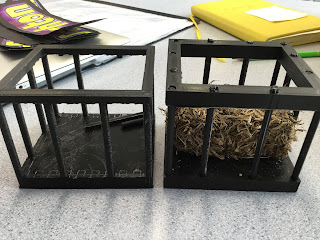 Left: The two designs side by side.   The ten hour version shown on the left, the five hour version, prior to the super gluing on the right.

The two designs are nearly identical but the students by breaking the process down and printing as component pieces instead of a single block design have halved the time that is needed to produce the project and reduced the amount of PLA (plastic) used in its production by nearly half. 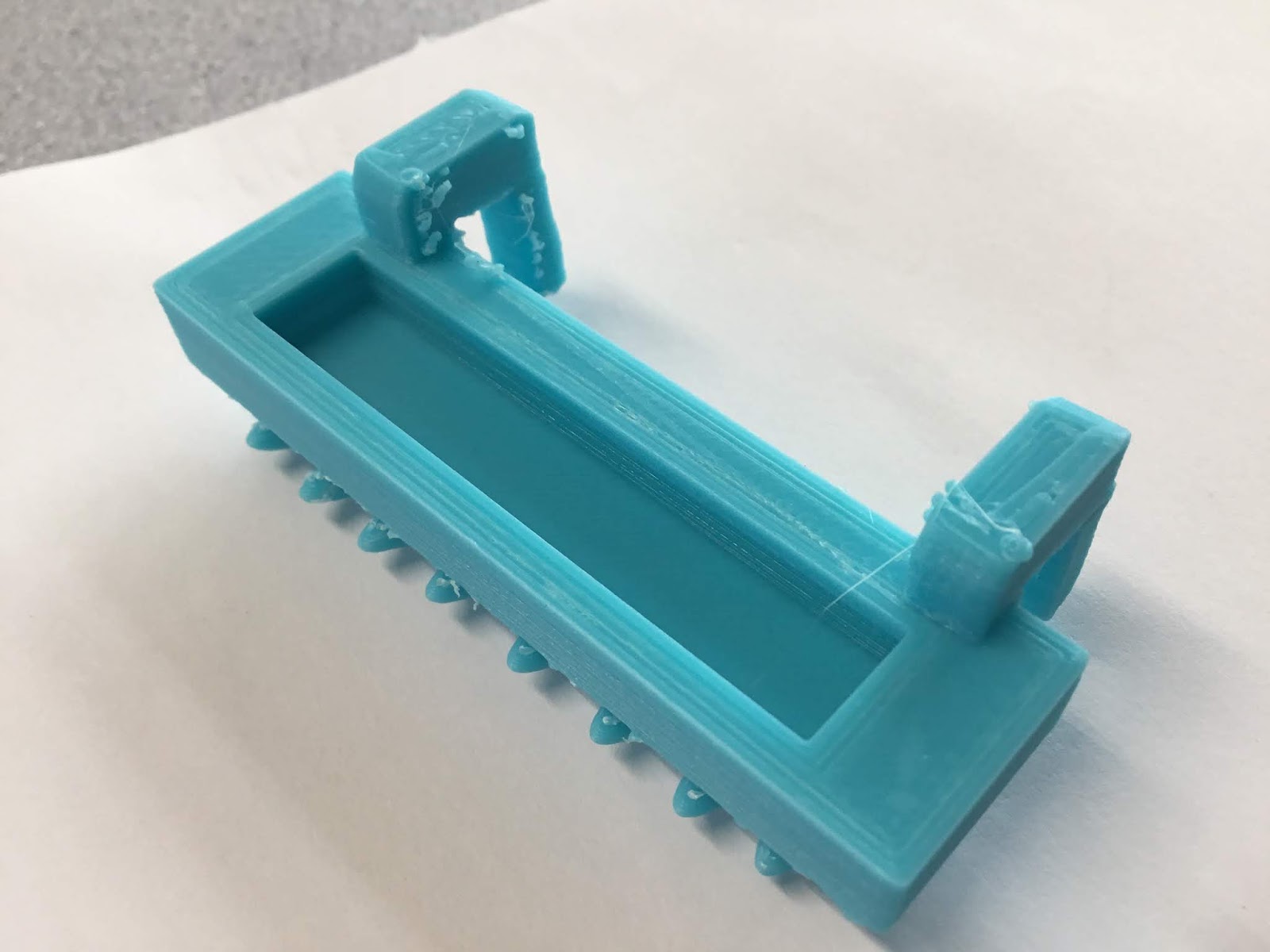 Challenge: To produce an authentic to scale model of a calf feeder that was capable of feeding up to eight cavles at one time.
Background: This is the second version of this project.  In the inital version on this blog the student had produced a four calf feeder which was for potential use with a commercial business.   This model had to be produced as detailed in previous post.   This has taken number models and prototypes until the 'four feeder' was successfully produced.  The next step was to change the colour varation, which is a simple matter of changing the print colour and then increasing the size of the print.    This has involved significant testing and reworking to get the dimensions to scale - as this is is a potential collaboration between our school/students and a local business creating something to use with existing products not easily available on the market.
Level of Difficulty: High - this is a precision piece that needs to work to a specific size, be mounting successfully on a model fence and meet the needs of the cow models to interact with.  There is no margin for error and this requires precision, which has been a positive if challenging experience for the students.
Timeframe: Two hours - this has been produced with a 8mm nozzle which is our default size.  Consideration has been given to reducing the size of the nozzle to increase the quality of the print.
Size: This print is 80mm long and 25mm wide.   Crucial to the success of the print has been the hinges at the back which have been designed by the students.   These have allowed the feeder to be clipped into place on the fence.    Students have been experimenting with producing the best fit design to do this.
What we would do differently: Our students are having a meeting examing the commercial aspects and considerations of mass production, they have identified a potential fault with the design and want to look at the considerations of its use (as a toy) relative to the strength of the print (specifically on the hinge that they have deisgned to hang it to the model fence.    As noted there is a potential issue with the size of the nozzle as well - it may be a print that we produce a higher quality print with my reducing the nozzle size.
Posted by M Webb at 3:40 PM No comments: