Challenge: Previously students had designed boxes to hold classroom cash as designs from the student.  These boxes had times ranging from 35 to forty hours for the base.  As an alternative the student concerned designed a holder that was a single figure.  This is the same student who had previously designed and created the 'pencil topper' print and design.

Background: The task was to create a holder for the students 'classroom cash' that are rewarded to students for excellent behaviour.  Previous designs were based around a full sized box.
Task: Students to create a workable print that was original and creative.
Level of Difficulty: Medium on the basis that the design was up to the students and the detail was dependant on the design.  This is shown further refinement from the 'pencil topper' design.
Issues: None.   The student was able to produce a limited amount of rafting with the project and the print was completed in a single print run.
Size: Length of 6cm (high), width (5cm)
Timeframe: Six Hours on Fast print setting.
Process: The student (who is ten years old) has shown the creativity to create original designs from scratch using Tinkercad and a laptop as creative tool.  He is confident and enjoying the process.  He is developing his ideas around geometric shapes and applying the problem solving.  Design from scratch using Tinkercad, converted to Cura for 3D printing and printed on an Ultimaker 2.
Recommendation: The student has been pleased with the quality of the print and the design of the animal.  There is a clear evidence of his progress using Tinkercad to create animals/shapes and the student is becoming recognised by his peers as a problem solver.  The print time would mean that the print is realistic as a holder for a variety of objects and could be easily modified to hold other objects depending on the needs of the students.
Posted by M Webb at 8:28 PM No comments:

When the students start utilizing the technology they are showing consistently that they can improve designs that follow later in a sequence.

Already we've recently documented on this site projects such 3D Printed Student Token Box, since this print another two designs in the sequence have followed - the latest of which is shown on the right.

The shape has changed considerably from a box like shape to a circular dish, also the lettering which was sunken in with the initial design has now evolved into having it standing out from the print.     The size and most other details contained with the original post are all still relevant and therefore we will not be posting this in its entirety.

There are a number of 'Cookie Cutters' currently in production.   The first of these was the 'Golf' themed Cookie Cutter detailed in a previous post.   Following this initial production a group of students have produced different themed versions of this creation, which have allowed the students to be creative and also produce something unique.  There will be a separate post on this material, featuring a range of student designs shortly. 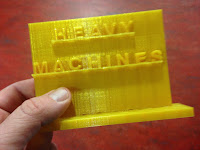 Finally as previously described the students who are competing in the Junior Robocup Competition involving Lego NXT/EVO3 Robots have been utilizing the 3D Printers to create props for the performance.   Following the initial creation of a few props students have started to realise the potential of the machines and how to integrate them successfully.   The latest prop to appear is the sign featured to the right.  The sign design initially was created by having the students write onto cardboard and then have it sellotaped up.  Upon seeing some of the props that were being produced the students created this sign for the performance.   It was created by a Y5/6 student, using Tinkercad and the regular production process.  The sign is 15cm long, 12cm high and was produced on 'fast' setting over a five hour print.  The sign is requiring to be re-printed as the lettering was produced individually on a ledge, without rafting.   The lettering was put together individually and dragged out of Tinkercad and as a result isn't uniform in size.