This project has been ongoing for the last several months and is drawing to its conclusion.   The prototypes of the animal sound lure (also referred to on this site as the Stoat Sound Lure) have had the electronics created, and the 3D Printer was used to create the housing/boxing.    The first units 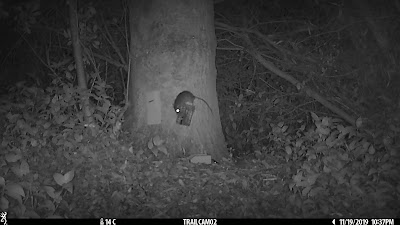 have been deployed at locations this week, and the results have been immediate.   While they are only in its infancy as a large amount of data and activations is required to be gathered already at the single location where the first sound box has been deployed there have been two nights of significant activity.

As well as having the sound box deployed there is also a chew card and a bait box, which contains rabbit meat.   The bait box has been deployed with the camera at this location for the past month.   Since the addition of the sound lure there has already been significantly increased animal activity in the first two nights.   On the first night the large rat shown above appeared and interacted with the bait - this is the second rat in a month but this rat repeatedly visited the site. 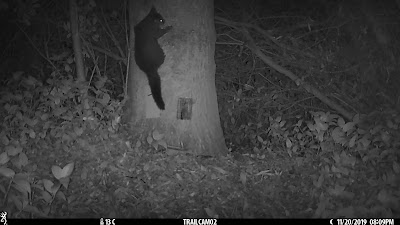 The lure is currently playing a variety of sounds at night, two possum sounds, two generic chick sounds and a stoat sound.

The second night a large Brush Tailed Possum arrived at the tree and climbed it.   This is the first confirmed possum activity in this location in a month.  This is also significant because other than the sound lure there is no attractant on the tree for possums, as it is part of a larger wooded area.

We are continuing to monitor this project over time to check on its success and using the 3D Printers to modify the size of the boxing and to deal with the issue of water proofing.   Update following an adjustment to the battery levels after two days of a low level of sound lure activity (the batery had not 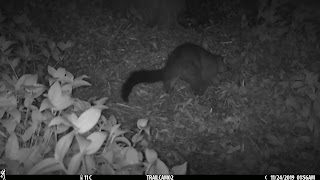 been charging due to a loose connection it was deployed again.   This resulted in the following activation.   The camera in this case had not been fixed appropriately at the sound lure tree, causing it to dip, not fully focussing on the tree where the sound lure was, however - the possum explored the area at the base of the tree resulting in this image that was taken.

Again after a calendar month this is the second possum activation within three days and the second night sequentially when the sound lure was used, with the only other bait that was present was the rabbit meat, now nearly two weeks old, designed to attract stoats, weasels or ferrets.
Posted by M Webb at 8:53 PM No comments:

Challenge: To produce a Mustelid Sound Lure.
Background: Regular visitors to this blog will know that a major project for several months now has been for the challenge for students to produce a working Sound Lure.   The challenge is to produce a sound lure to draw pests (in a New Zealand context) to a traditional trap.  Work began on this several months ago and the 3D Printer was crucial as the designs and the prototypes went through many stages and changes.   Boxes were created, adapted and changed based around the designs of the project and what was required to complete it.  Various speaker and solar panel combinations were used and the electronic parts have changed several times.   This is the final prototype of the project and has been now moved forward to the testing stage with the unit being deployed locally in trapping locations.   The next step is to refine this design improve it and then look forward to deploying it on a larger scale include gaining detailed data about what is happening, and how effective the sound lure is in improving the success rate of the trap.  Early evidence suggest that the Department of Conservation in New Zealand is experiencing an increase of possum results in the range of 30%.

One of the complicating factors for this project is there is not a equivalent version of a Mustelid trap in existence and this version has been produced (with assistance from several amazing experts) with our class of students.     The video that is linked with this explanation us a run-down of the project materials - if you want to find additional information please contact the administrator of this site myles.webb@gmail.com).

The boxing has always been a key component of this project as it needs to be deployed in outdoor conditions.  This has been detailed repeatedly on this site and I decided to simply show an example of the latest version with this post.

This version of the box is specifically designed in part to house the Picaxe Chip that is controlling the electronic set-up for the device.   The design of the box has been modified from previous versions as this has an attached or linked solar panel that is responsible for controlling the powering of the machine based on a light level reading.   Essentially if the solar panel is shaded it can be programmed to operate, plays a track, and then checks the light level again.   If the light level has altered or is then positive the MP3 player will switch itself to sleep mode.   This is explained indepth in the video above. 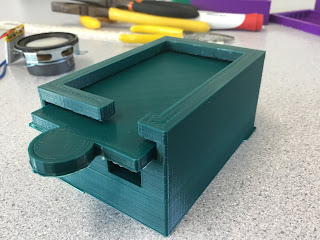 In the latest 3D Printed design in this series the Picaxe Chip is contained in the box - the modified solar panel means that the slide lid for the top of the box can cover the top of the box in its entirety.   The lid has deliberate overhang to allow shielding at the entrance point for the electronic cord, the depth of the box allows the battery to be underneath the chip.

Dimensions of the box are 90mm long, 60mm wide and 40mm high.  The box has a 5mm thick lid and 5mm thick sides.   The lid can be easily slid off to allow access to the box and will be held in place by duct or masking tape.   The solar panel has a separate 3D Printing boxing detailed here as does the speaker.  Currently the main box is being printed with a 8mm nozzle and a 20% infill which is producing a print time of six hours.   This part of the project has been designed by a ten year old student who has a years experience in 3D Printing.   It was produced using Tinkercad without any supervision or advice from the classroom teacher whose sole role was the removal of the rafting.

Further information on this project including a detailed breakdown of the electronics, the dimensions and scale of the print etc can be made by contacting the person in charge of this blog.

I would personally like to acknowledge everyone who has contributed to this project in the past, whose work is ongoing and who will work on it in the future.  These people, some of who are experts in their field can be contacted through myself.