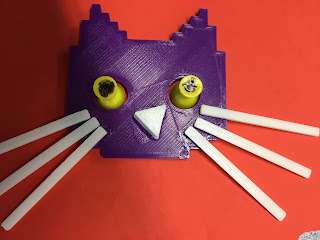 This print featured on this blog previously.   The intention was always to add additional details onto the cat, which was to include the whiskers and the nose.

The addition of these features was a simple design and a twenty minute prints.   The eyes of the print were using the yellow magnets, which allowed the magnet to hold itself in place.

All other information on the print remains the same.


Left: This is an update of a previous print, as it has been significantly adapted.   The project here was for our 2019 School Market Day.  In the original poste detailed on this blog the 3D Printer was used to create a single line for an LED Light/Jar combination.

Students sourced an LED light online from an online store.   They then separately purchased a set of jars from an online New Zealand store.  A transfer was then applied to the outside of the jars and they were spray painted.   The transfer was removed meaning the light was able to illuminate specific shapes that the students had created.


The LED light needed a ring placed around it to allow it to drop into place at the top of the jar in the original design.   Students after testing found a fault with this, as changing the LED light meant the ring couldn't be permanently placed on the top of the jar.   The students came up with a solution for this, they created a set of two rings.   The first, as shown left, was super-glued into place on the jar, and fixed permanently in place.  The LED light was glued into the second ring and this ring sat on the first ring, which meant if it needed to be removed from the jar it could be easily taken out.

The role of the 3D Printer in completing this project was essential - the rings that were produced needed to be a specific diameter to ensure that the light could be held in place, as without them the light could not be mounted to the jar.     The design while it was basic required a specific size to ensure it worked and involved the students testing twelve protypes until one that met the brief worked successfully.   The print time for the rings was relativeely minimal - the students were aiming to produce 140 rings to ensure that the jars were completed and they had back up lights as well.   These were produced in a batch of six rings at a time which took a combined print time of 90 minutes.  Each
ring had a diameter of 10mm and was 50mm high with a width of 5mm.   If it had been printed individually it would have had a estimated time of 20 minutes to complete.

The project was a fantastic example of combining the 3D Printer with other technology/craft to produce something with a meaningful purpose.  It allowed the project to be completed successfully which would not have been possible without it.   The finish of the lights for the Year 5/6 project needed a little refinement, as shown in the photograph, but this was more in relation to the use of spray paint in the finish, and relative to the number of jars that the students produced.   In hindsight the students would have produced them over time and concentrated on producing a clear finish.
Posted by M Webb at 12:20 PM No comments: