Challenge: To produce a box that would push the Ultimaker 2+ 3D Printer to its limit in terms of design features and size.
Background: At the end of the year one of the students who had been working on designs during the school year (which in New Zealand runs February to December) wanted to finish the year by producing something special.  He wanted to design a box that would test the limits of the 3D Printer in terms of design, such as features on it including size and a drop down lid.   The design was always going to be complex, large and detailed.  Originally it had been conceived as a Glow-in-the-Dark Filament print - however attempts to do so given the scale of the print were less than satisfactory so a change was made to go with a dark blue instead.   Each of the four panels of the box 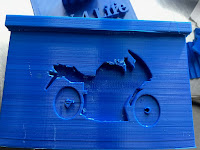 had a design or a theme to it.  The designs were delibrately sunk into the base of the box to ensure that they looked as visually appealing as possible.    The lid was designed to work specifically in relation to the top of the box featuring a sunken lid design.   There was further personalisation with the lid and the handle.

Left: Design on the second side of the box featuring a motorcycle. Some of the detailed required minute rafting removal.
Level of Diffculty:   High - for an eleven year student with two years experience of 3D Printing design and creation, this student has shown time and time again that he has a talent for creation.   This sort of design is as difficult as it can get to be successful.

Timeframe: Thirty six hours for the printing of the box - which was completed with starting with a full roll of filament.   The lid took a further twelve hours.  Again this is not normal but rather a reflection of the scale of the design, there was significant 'rafting' in this design, each of the panels on each side of the box had a false

Size:  As noted, in at attempt to push the printer to its limits the print was designed to make a large storage box.  This measured 140mm across (the base at the bottom) and was 140mm deep.  There was a significant lip at the top of
the box that was a 10mm square to allow for the drop down lid.   The box from top to bottom measured 100mm.   The width of the sides of the box was 15mm, with an edge of 5mm on the top of the box, the rest of the sides maintaining a 10mm width.   The lid for the top of the box reflected the dimensions of the base - it had a raised drop down lid which overlapped with the top of the edge of the box.   The lettering that dominated the top of the box was raised 10mm.   The handle used for the positioning of the top of the box was 45mm from the top of the lid.
What we would do differently/Next steps for students: There was one or two slight issues created by the removal of the rafting, this created some marks visible in the final print (in the name panel and the motorcycle panel) these perhaps could have been larger.
Posted by M Webb at 9:31 PM No comments: 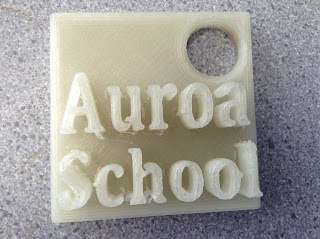 Challenge: To use Glow-In-The-Dark 3D Printed Filament in a meaningful and creative way to produce a range of short term prints.
Background: Completing the run of decorations based around Christmas Decorations for the past few weeks we wanted to move in the direction again of using Glow-In-the-Dark (or liumious PLA depending on the branding) to create an effect.    As such we targeted a couple of simple ideas that we have visited in the past, a keyring and a small badge, with the effect created by the filament to compensate for the basic nature of the design.    The student themselves initiaed the idea, a larger print was planned but the printing using the filament was not successful - the print was in the twenty five hour range and after one to two hours it was apparent the PLA would not produce a clean finish.  Level of Difficulty: Low- the idea here is to mass produce something relatively small that will show some creativity for visitors to the school that we can give them as a gift.  We also will tailor made the gift depending on the circumstances to represent local businesses or schools that might visit or we might have interaction with.   The basic design is very straightforward with a basic shape and simple lettering a hole placed for connection the kind of filament of course is the simple 'x factor' related to the print, Glow-In-the-Dark filament is something we've experienced some success with in the past.
Time Frame: Three Hours - the intention is to mass produce these as school related gifts and therefore the idea was to minimise the size - the object in question is designed to create a stir and the filament choice is the primary way to do so.
Size: Again - delibrately chosen as something that we are mass producing as a basic gift.  We therefore wanted to balance the purpose with the keyring being practical but not too large.  It was 5mm thick and was a square that was 50mm across and 50mm high.
What we would do differently/Next Steps for Students: Having experienced using Glow-In-the-Dark filament before we are intending to run it through to the end of the spool and produce the same print repeadtely.   This is because after experiencing it in the past we have found information that shows it needs to be sealed when not on the machine.   If you don't then it degrades quickly and we want to utilize it as much as possible before this process occurs.
Posted by M Webb at 9:49 PM No comments: 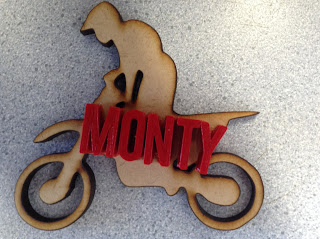 Challenge: Student wanted to combine the lettering created with a 3D Printer with the use of the school laser cutter with the goal of producing something as a gift for Chirstmas.
Background: Student has shown excellence in use of 3D Printing in the Classroom.  While they are extremely gifted with design we have been trying to encourage to them to think about combining technologies and ideas.   In this case the student created the lettering first, and then used the school laser cutter to cut into MDF to create the background image.   The image came from a simple online search and took approximatley ten minutes to laser cut.  The lettering was created using Tinkercad from the main interface.   The 'Monty' lettering shown with the above photograph was 15mm high and measured 60mm across - taking forty minutes to print.  It was then superglued to the base. 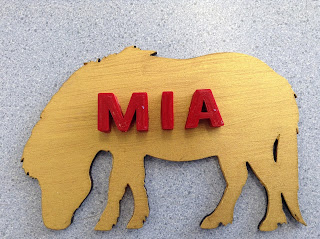 Left: Further repeating the process the student added a coat of basic gold paint to the same process, the base was wood with MDF again and the lettering was a simple case of creating a basic Tinkercad Font design with lettering which were 20mm high and 40mm across.

The laser cut aspect of the design took ten minutes for the cutting, the design itself was freely available online. 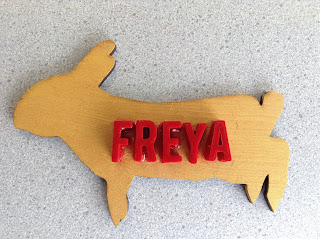 Left: Another similar design instead featuring a rabbit.  Again a similar process to the other designs, the student is using freely available designs or outlines of creatures (in this case the rabbit) and then painting it with a gold backing colour.   The student has gone with a 'Christmas Red' PLA to contrast with the 'gold paint' producing the red to stand out and for effect.

For the printing part of the name the default settings that you will be familar with on this blog apply.
Next Steps for the Students: The student concerned has developed her use of the 3D Printer to an extremely high standard producing a significant body of work.   The next logical step to extend hereself is to look at combining the two technologies more on significant projects.
Posted by M Webb at 9:45 PM No comments:

Challenge: Student wanted to create a specific object -  a stand for a cellphone that the student owned.  He wanted to personalize it and put a theme into its base.  This was his first ever print and the student involved is nine years old.
Background: As part of the process of designing 'Christmas' themed decorations in our classroom and now across the school, we also have been trying to expose students to the technology and getting them thinking about projects that they might be able to create to solve a problem or have a purpose to make something work that was currently needing to be completed.  This print came out of that as the student concerned wanted a stand for his cellphone and felt that it needed to be personalized.   As it was also part of a series of festive decorations the student decided to add the star and the Christmas Tree as shown above.   Also of note in the design was the way the name was
created for the print.  The lettering was large and the student, despite it being his first ever print, wanted to have the lettering sunk down into the base of the design. All in all the student was producing a piece of work that had a specific purpose, it was their first ever design (for a nine year old) and the print was extremely successful.
Level of Difficulty: Medium - this worked in unison with the sum of its parts.   The print worked perfectly for what it was, its one of those prints that is simple, but extremely effective and is successful that it appears to be straightforward (for instance a cellphone fits perfectly on this as a stand) but it requires a successful print to do so.

Time frame: Four Hours- given the purpose of what was required this is the absolute minimum print time that would be required.   Testing of this stand with a regular cellphone had it working perfectly but with very little space either side of the phone, hence this would be an absolute minimum time required to complete the print.   There was not rafting what-so-ever with this print.
Size: The print was 75mm across and 70mm deep.   The block at the back for the leaning of the cellphone was 40mm high, 20mm wide and 75mm across.   Given the dimensions of a cellphone there is not more that could be reduced from this, obviously a slightly larger phone would require a larger base, this is perfect for a regular cellphone.
What we would do differently/next steps for students: This was a first attempt at a student producing something with a very specific goal in mind, as is mentioned throughout the print the student was extremely pleased.   The 'Christmas' theme of the design came about as it was created during the festive season, perhaps something less seasonal could have been designed.