Challenge: to create a decoration for a Christmas Tree designed (from scratch) by students suitable for hanging on a Christmas Tree.
Background: This is a further development of the 'Christmas Decorations' post from earlier in this blog.  Initial designs included run of the mill decorations that were not completely original and involved converting GIF pictures - this design was from scratch, included in it was an innovation - the student created a 'cork' or insert for the top, which would allow this to be hung.
Task: The student was wanting something extra for his first print and thus created the lid/cork which worked as an insert.
Level of Difficulty - Medium - the student wanted to add the extra by having the 'cork' which needed a separate part and able to be inserted into the top thus allowing it to be potentially hung.
Issues: the print was completed with glow-in-the-dark filament, it seems a little flaky compared to the regular and not as smooth.  The cork/lid fitted perfectly at the second attempt, as it needed to be resized from the draft print - however it fitted perfect and was snug which created the avenue for it being hung from a tree (its going to take the place of a star on a family tree!)
Size: 11cm in height, 5cm across and a depth of 5mm for the base.  The letters had the deliberate effect of being different sizes with the intention of creating a 'step' look.
Timeframe: Six hours - on a regular print.
Process: Tinkercad (Beta) design from scratch, converted to Cura (new version) and then printed on a regular Ultimaker 2.
Reflection: The Y5 student (ten year old) created the design himself and was able to show good attention to detail and creativity by adding the cork/lid.  The student concerned was thrilled with the result which completed the brief but included an innovation.
Posted by M Webb at 9:19 PM No comments: 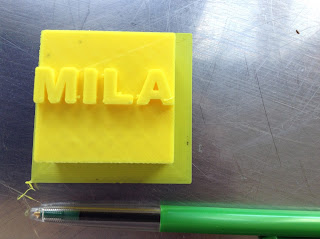 The original design and print - student brief was for a label suitable for a present for Christmas.  As it was a prototype and the students first print he opted for a simple block design with 'Mila' (the name of his cousin, who the gift was for) written across the top.   He created it from scratch in Tinkercad, with a three hour print (rafting has not been removed and is visible at the base of the print).   Design was 4.5cm across and high to a depth of 2.5cm - print time for this project: three hours. 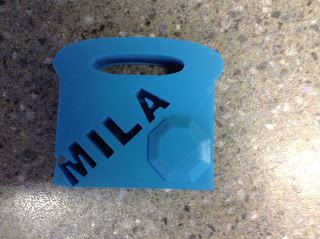 Having created the first print he decided to refine the print on the basis of being able to attach it to the present, thus he created a hole in the top (earning the nickname of the 'toast' in reference to its likeness to a slice of bread).   He also sunk the letter for the name and added a geometric shape in the bottom right hand corner.  Width of 6cm, height of 5cm and depth of 5mm.  This was also a three hour print, however it was printed on an Ultimaker 2+ (the previous print was printed on an Ultimaker 2 regular). 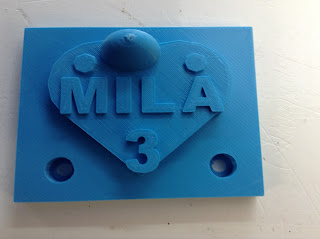 In the third version of the project print the student had started to experiment with added additional shapes to the design.  The holes that were printed at the bottom were intended to 'hang' to design, which meant it was impractical work as a label.   The design features of all of these designs were created from using the geometric shapes design feature of Tinkercad.  This third version was also printed on the Ultimaker 2+, without any rafting.  Width of 6.5cm, height of 5cm and depth again of 5mm.
This project was again with a print time of three hours. 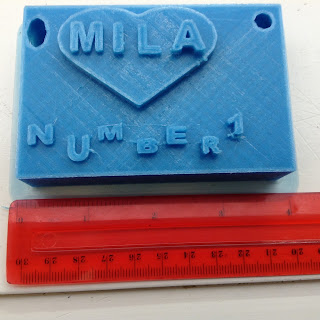 This was the final run of the project - the student made the decision to print the project using Glow-In-The-Dark filament.  The intended recipient is a cousin is four years old so the student felt that by printing with that filament would add something to the project.    The print was completed on the Ultimaker 2 (note the comparison between this and the last two prints in the sequence with the 2+) an exclamation mark was missing following the '1'.   The depth of the print was 2cm - it therefore gave somewhat of a 'block' effect rather than a label, however the student himself desired to have this effect as he thought it would work as a stand alone present given its display possibilities.   The two holes that were printed into the design were of different sizes in the form of an experiment.   10cm wide by 7cm high by 2cm deep.   This print took nine hours to complete.
Posted by M Webb at 2:24 PM 2 comments:

Challenge: To produce a working model of a Lawn Mower.
Background: A presenter who had heard of the 3D reputation of our school wanted to produce a series of props for presentations, the pieces that he was looking for needed to represent actual objects that people were familiar with.   The props needed to be as life-like as possible.
Task: Student created a representation of a lawn mower using Tinkercad from scratch.
Level of Difficulty: High - the student was creating not an original piece but a copy of a common everyday item.  It had to be recognisable and plausible.
Issues: Rafting caused the wheel to be removed when the rafting was removed.  The filament used was not standard filament (see below) and as a consequence is more difficult to remove.
Size: 18cm by 10cm by 15cm 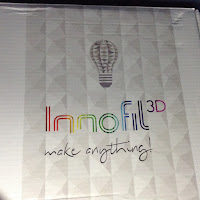 Timeframe: Regular print settings - eighteen hours.
Process: The student was using the Beta Version of Tinkercad, which had just been released prior to the project being completed.  The print was completed using a different filament from previous prints.  Previously we had used a cheaper 'regular' filament - the Innofil was approximately 50% more expensive but it was clearly visible in the quality of the final printed version.  After consulting with the classroom teacher involved this filament would be preferred for 'show' or demonstration pieces.  The student designed the print from scratch including all aspects of the design.
Reflection: The student responsible for this design has shown talent and creation right from some of his first projects when he was Y5.  He is currently a Y6 student, who is ten years old.  He is able to individually create designs with this detail using free software.
Posted by M Webb at 9:10 PM No comments: