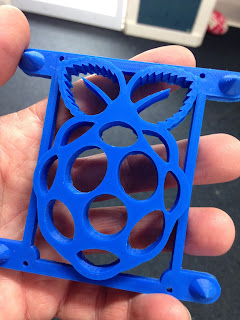 This is an alternative version of the cover for the previous project.  In the example the teacher had used a School Milling Machine to create a plywood cover the for the Raspberry Pi 3 Box.   On discussion with the teacher about the project he indicated that he had initially produced a 3D printed lid, and decided to go for a wood finish for aesthetic reasons.  This photograph is of the other option for a lid, and features the Raspberry Pi Logo.  It was screen shot and then imported directly into Tinkercad.

The shot to the left shows the base of the cover, which included a stand built into the design.  It was a 12 hour print without rafting on a regular setting.  (Please note that all prints from now on are primarily being carried out on an Ultimaker 2 which has an expansion kit installed on it, the Ultimaker 2+) 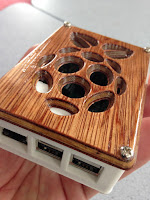 Challenge: The teacher concerned had a Raspberry Pi 3 and wanted to produce a case to keep in secure and protect it.  To do so used a combination of machines and Tinkercad.  He used a milling machine to produce the wooden lid and then used the Ultimaker 2 to 3D Print the case.
Background: This project was originated by the classroom teacher as an individual project.
Task: Produce a workable case for a Raspberry Pi3 which would protect the device but also also for the device for being fully operational.
Task: The dimensions for the project were sourced from plans available on Thingiverse, although the teacher did not use these plans, he still created an original piece in Tinkercad.
Level of Difficulty: Moderate - although this was a teacher designed and originated project students could replicate it by following the process.    The original measurements were taken from a third party and this was possibly the most challenging part of the process. 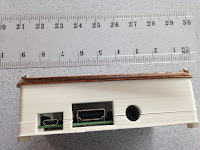 Issues: None - the teacher purchased a set of nylon nuts to complete the process and ensure that the lid was secured to the base.  The 3D Print was completed with the Ultimaker 2 (which is an upgrade kit in addition to a regular Ultimaker Printer.
Size: 9.5cm x 3c, x 6.5cm.  (which is the dimensions of a device to house the Raspberry Pi 3).
Timeframe: 3D Printed components: the base was printed in an overnight print on regular Ultimaker2 3D Print settings.  The timeframe was approximately twelve hours.  The lid was produced by a school milling machine and took two days to cut the wood.   The wood was then lacquered with spray from a spray can, and left to set.    The Plywood lid was a regulation piece of wood.
Process: This was a little different in that Thingiverse was the first port of call - however this was to gain the measurement specifications to make the base.  Both the base and the lid were designed in Tinkercad and milled and then 3D Printed.   They were then joined by the screws.    The design of the Raspberry Pi Logo was screen shot and then dropped directly into Tinkercad.
Posted by M Webb at 2:54 PM No comments:

This was the final 3D Designed Object that was entered by students in our local Mathematical 3D design competition.   The students who were responsible for this design and print were Y8 students who were 12 or 13 years old, as were the other objects in the series.

How long did it take to print: the student assured me that the print in question took three hours to print.   I concluded based on my experience that this was not correct, as given the size of the object it would have been a minimum of thirteen hours of print.  It was printed on a 'fast print' setting.
Size: 15 centimetres.
Problems or Issues: the print had multiple angles and points of the star, as a result the print had various rough points and points that needed to be finished.  The print was designed and created without rafting using Tinkercad.
What would you do differently: The student would have created a bigger star to be more impressive.

This is the third in the series of students created 3D Printed objects that were entered by students as part of a local Mathematical competition.   Traditionally in the 3D Design section of the competition the students have created objects from traditional material, to our knowledge our school is the first to 3D Print objects specifically for the competition - although of the four objects entered only the previous 'Lemon Squeezer' object achieved a 'merit' placing.

The student responsible for this 3D Print wrote a post about it on her student blog.  You can view the link by clicking here.

How long did it take to print? Twenty hours approximately - the student was unsure about the settings and passed it onto the classroom teacher once it was designed in Tinkercad.  Judging by the weight and the quality of the finish it was printed on a 'fast print' setting like most of our prints.
Problems/Issues: The rafting is visible on the base of the print, this wasn't sufficient to be easily removed and as a result was still visible on the finished print.   A further design issue was that the entire print was one colour and the student would have preferred to create one based on different colours, although not those necessarily from a traditional Rubix cube.
What would you do differently: The student had considered the combination of colours and somehow printing a combination of colours to have different squares.  However there would have been issues, the design of a Rubix cube has shapes on the sides of each square and they could be individually rotated - the other question was the gap between the blocks, this was created but cutting a regular box shape and inserting a gap, this was simple to do with a basic design but combining colours which would have to be rejoined together which would have been much more challenging.
Posted by M Webb at 10:06 PM No comments: