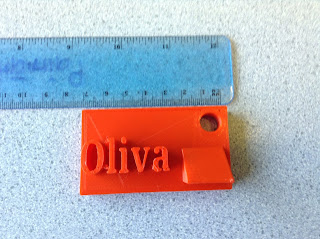 Challenge: To introduce new students to basic 3D Printing and design we wanted to introduce some new students (aged ten and eleven years old) to 3D Printing.  To do so we were looking to identify a short term project complete that would engage the students.   We went for designing a working key ring, variations of which we'd attempted before.
Background: We have attempted this before in the past but wanted to look at it again to complete it in a short turn around.   The idea was originally for a keyring however it is noted at our school that junior students have ID tags for equipment etc and this would also sort it as a possible use for this item.   The 'Oliva' tag shown in red in the photograph was designed by a student 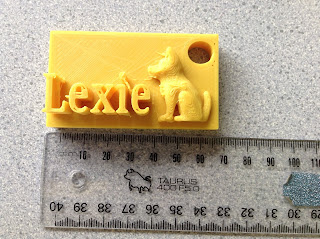 who was eight years old, and featured a triangle deisgn next to the name.  Both of these are available on the basic Tinkercad interfact and can be accessed and used within and extremely short time frame.   The second basic example that is shown, the yellow print with the name 'Lexi' also included a basic dog shape, was designed and created by a ten year old student.
Level of Difficulty: Low - the students are using the basic interface as an introduction.   The tags shown are basic designs from the interface that students who are as young as seven or eight can complete easily.  With assistance it could be completed conceivably by younger students.
Timeframe: One hour - the design was created with this in purpose.  We were looking at ways to produce something that would have a purpose in a short space of time.  There would be the opportunity to alter this by reducing the size of the base, which has been printed with a 20mm width.
Size: We were using the same basic starter block for this print - a 70mm by 20mm with a width of 20mm.   This proved to be satisfcatory for this print, and this could be modified to mass produce them, we also looked at only just modifying the keyring by changing PLA over and could have looked at producing a series of component parts to produce multiple colours.
What we would do differently: Nothing from the design for this print, we have attempted to complete the project and done so succesfully.
Next Steps for Students: Having completed this project the students concerned are using it as an introduction to moving onto more challenging projects. 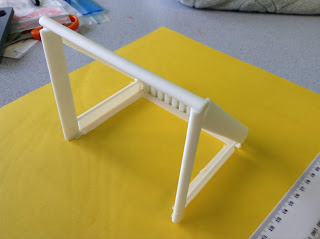 Challenge: Student was interested in producing a game of table soccer.  As part of the game he wanted to have a clearly defined goal post for the game.  He had tried cardboard versions of the goal posts but wanted something that would be more robust and permanent.
Background: Student was looking at ways to produce goal posts for the game mentioned.  There were various designs that the student looked at creating, including attempting to replicate existing versions of this print.  The student had attempted to design this from scratch but was not satisified with their results, relative to other versions that were available.   It is also worth mentioning that the student concerned is nine years old and this was his first attempt at 3D Printing - he has seen other projects that students have worked on but is developing his confidence with 3D Printing.

Level of Difficulty: Low - this is intended as an ongoing project which the student will produce a series of prints associated with the game.  The print is straightforward, the engagement with the student is as important as the process.   Creating the goal-posts as the student has done will drive the game itself foward as the rest of the details will follow the size of the goal.
Timeframe: Five hours - there were versions of the print that included netting etc but the decision was made to focus on the poles and to keep the design basic.
Size: The width of the deisgn was 110mm.   The back of the design was 120mm long.  The height was 100mm.   The various poles that make up the goal posts were 10mm thick.   We are intending to test the strength of the goal posts relative for the game and would be looking at redesigning these if prove to be not strong enough.
What we would do differently: We would look at road testing this design to ensure that it would work.  The print was produced as a single file - there was considerable discussion about the printing of the individual goal posts and then super-gluing all the pieces together post printing.   We decided not to do this as the student wanted to be successful with their print run.
Next Steps for Students: As mentioned this is looking as developing a game as part of wider project.
Posted by M Webb at 1:54 PM No comments:

This slideshow is a summary of projects that are School/Classroom related. They include a brief description and a link to the original post on this site.
Posted by M Webb at 11:52 PM No comments: 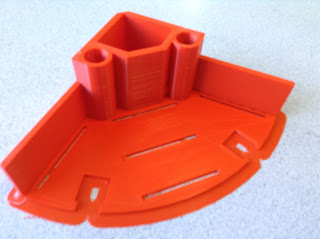 Challenge: Student wanted to manufacture a replacement piece of a shower caddy/shower storage shelf for his shower at home.  Original piece was broken through use and he wanted to create a replacement.
Background: Student is a senior student (twelve years old) who has worked through our school system.  He has used the 3D Printers and our Laser Cutters for a considerable length of time.  This student has worked on a number of major projects of increasingly difficulty and shown flair and design with his creations.  This replacement part was designed and 3D Printed so it could be replicated exactly to replace the broken part.  It needed to work as part of a larger piece and needed to fit in perfectly with an existing piece.   The 3D Printer was utilized in this example because the part would be exposed to water on a daily basis.    This is the students first attempt at completing the part and the measurements etc were completed independently and designed in Tinkercad. 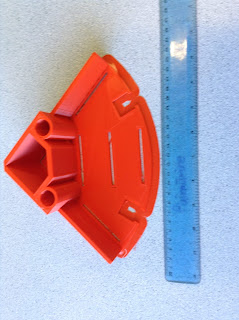 Level of Difficulty: High - for a school student context this is about as complicated project that we have seen in the last four years from our students.   Every aspect of this print needs to be correct for it to work in unison with an existing part.   Each of the slots fits into an existing part.
Timeframe: Nine hours.  The base of the shelf in this design is extremely thin, with a width of 2mm.The intention is for a potential reprint once the print itself once the print is proven to be successful, with that in mind a considerable increase in the print time would be expected by the nature of the base being the most significant feature of the print itself.
Size:   The dimensions of this print is slightly deceptive.   The base measure 140mm across by 120mm the wings at the back of the design are 40mm hight.  As noted in previous description the width of the design is only 2mm thick in places, something to be considered if the project is to be redesigned.
What we would do differently: This project was created and designed exclusivley without input from the teacher.   The project was to solve an issue at home, where the student had independently identified that a 3D Printer would be the best tool to solve this problem and replace a part that needed to be.   Other than the width of the thickness of the shelf, it is, in our opinion an example of an extremely high calibre.
Next Step for students: With the print complete the student is currently checking its suitability, the only issue of note is ensuring that the slots are accurately aligned with the shower piece and that the width of the shelf is adjusted to take the weight on shower items.
Posted by M Webb at 6:45 PM No comments: 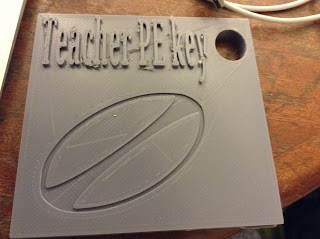 Details - This is the second print in this series.  This is a second version of the same key, as explained in detail the School has dual PE Sheds, a student and teacher.

Having Laser Cut wooden versions of these key rings, which are delibrately oversized to ensure that students (or staff) are not able to easily put them into their pockets.  The laser cut versions worked well however their high use meant that the wood they were cut into became stained and looked untidy.  It also saw the need to be redrilling the key hole as the wood started to wear.   The solution devised by our students was to 3D Print two matching keys, which were then 3D Printed.  This design was based on the original print detailed here previously with the only changes to the print being the lettering, which was modified to reflect the key, the other change was to switch PLA from bright red to grey for easy identification.  Print time and all other details identical.
Posted by M Webb at 5:59 PM No comments: